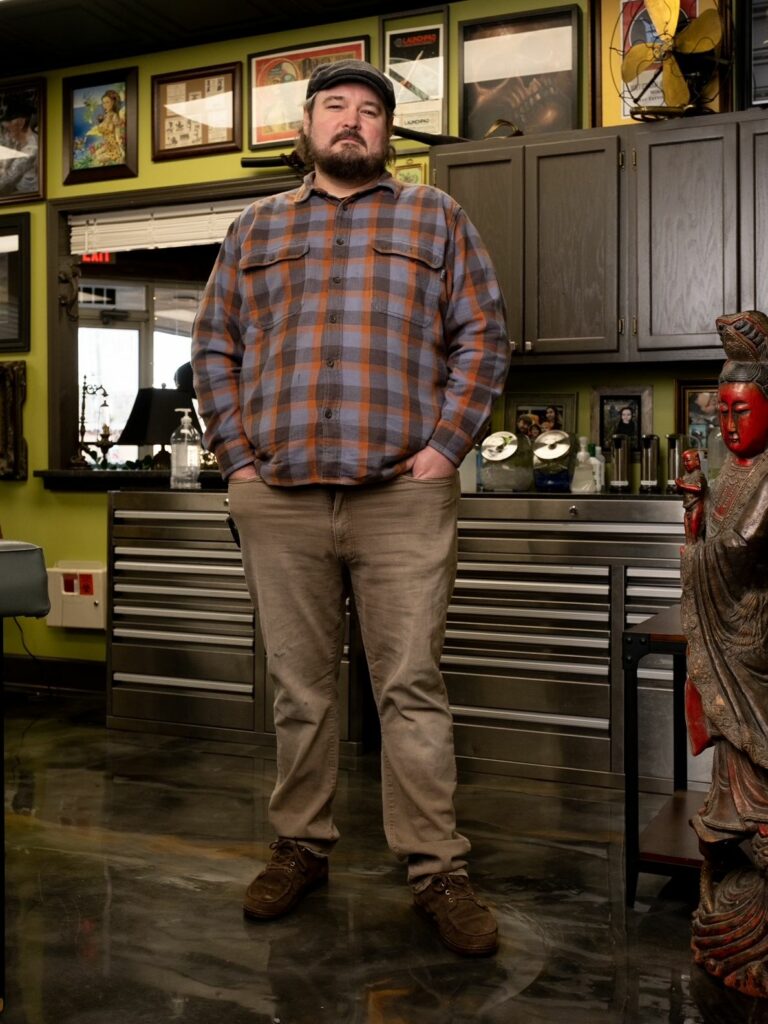 Matt O’Baugh’s artistic journey began in 1998 when he moved to Kansas City, Missouri to attend college at Kansas City Art Institute. At KCAI, he pursued a Bachelor’s degree in Sculpture. It was at the end of his tenure at KCAI that he discovered the sacred practice of tattooing. Matt’s interest in this ancient art form quickly became an obsession that has led him to where he is today. After leaving Kansas City, Matt worked in a sculpture studio in Fayetteville, Arkansas under the direction of well known Sculptor, Hank Kaminsky. It was there that he helped create wonderful pieces of sculpture that are all on public display today. Matt was also featured in the documentary Sphere of Influence that documented the making of one of the most well known pieces of public art in Fayetteville, “The Peace Prayer Fountain.”

Matt eventually moved back to his hometown of North Little Rock, and gained a tattoo apprenticeship from a friend. After 10 years of tattooing in various shops around Central Arkansas, Matt opened his own tattoo studio, Black Cobra Tattoos in Sherwood, Arkansas. Matt has dedicated himself to this craft for more than fifteen years. In this time, he has graced the pages of several nationally and internationally distributed tattoo/art publications and garnered countless awards for his talent.

Matt works in many different tattoo styles and prides himself on being able to dominate any design that comes his way. Matt is known for working in a style best described as “illustrative realism” but also enjoys doing portrait tattoos, realistic tattoos, new school tattoos, traditional Japanese tattoos, American traditional tattoos, and everything in between.

Matt has recently competed on the popular tattoo-based reality show, Ink Master on Spike TV that debuted on June 23, 2015. Matt finished as a Top 3 finalist. Today, Matt continues to appear at tattoo conventions around the U.S. and abroad where he gets to meet and tattoo many fans of the show. In his spare time, Matt enjoys working on one of his many “car projects’. Matt owns several antique cars and 4×4’s. Matt also enjoys blacksmithing and making things with his hands. One of Matt’s greatest joys in life is spending time with his 4 year old son, Henry. Henry loves drawing with his dad and one day wants to become an artist as well. When he isn’t traveling to tattoo conventions or spending time with his family, Matt can be found at his shop, Black Cobra where he stays busy drawing and tattooing for his wonderfully patient clients that are willing to wait for months on end to snag an appointment with him.

To inquire about booking with one of our artists, please click the button below and use our Contact form. We’ll review your submission and reply to you if requested.